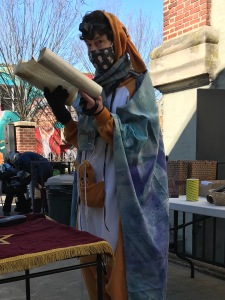 Rabbi Lev Meirowitz Nelson serves as the part-time rabbi of FJC. In his day job, Lev is Director of Rabbinic Training at T’ruah: The Rabbinic Call for Human Rights, where he trains rabbinical students to be religious human rights leaders and develops materials to help rabbis across the country tackle issues such as systemic racism, immigration, and mass incarceration from a Jewish perspective. In 2017, Lev was honored by the Covenant Foundation with the prestigious Pomegranate Prize, which recognizes exceptional early-career Jewish educators. Lev’s greatest joys as a rabbi include leading soulful singing, facilitating Torah discussions where he learns something new from participants’ insights, and anything having to do with children. He was ordained at the Rabbinical School of Hebrew College, a pluralistic school drawing on a wide range of Jewish movements and traditions, where he was a Wexner Graduate Fellow. Lev holds a BA in Geology from Brown University. He lives in the neighborhood with his wife, Eliana Meirowitz Nelson, and their three children: Barzilai “Buzz” Khalil, Tav Hadar, and Sassonya Ness.

From the Desk of the President

As President of the Flatbush and Shaare Torah Jewish Center, Heather strives to build a community that is safe for all of the intersecting identities in our community.  It’s vitally important to her that all who enter the FJC tent feel safe and embraced as the perfectly designed humans that G-d created them to be. By day, Heather is a school leader serving students in NYC’s special education district. As a social justice warrior, she has been collaborating with USCJ, UJA and the Jewish Education Project on initiatives that further the work of making our Conservative Jewish spaces safe and embracing of Jews of Color. She has had the pleasure of teaching the Race Consciousness series that was first facilitated in our community to synagogue communities across the country. Heather is currently the lead on the Kol Tzedek Project, an initiative of USCJ’s Synagogue Leadership committee on which she sits as a member and she is very proud to have been awarded METNY’s 2020 Ernest L. Rothschild Leadership Award. Of all of her hats, the one that tops them all is as mom to three boys who inspire her every day to do her part to make the world a better place for them to live in.

Honorary Board of Trustees

Honorary Board of Governors