The Zohar—the great medieval masterpiece of Jewish mysticism (say that five times
fast!)—teaches that in this month of Tishrei, the sitra achra is at its strongest point
of the whole year. Sitra achra is Aramaic for the “other side,” which is the Zohar’s
term for the aspect of God from which evil comes. It’s the power in the world that
obstructs our access to God and tries to distract us from the path we are supposed
to walk on. You can think of it, if you want, as the dark side of the Force.
We all have our own personal sitra achra, and this is the time of year when we try to
confront it. And because each of us is a microcosm of society, we face a dual sitra
achra: the evil within ourselves, and the evil of the world at large that we find
ourselves ranged against. These two struggles, the inner and the outer, are
inextricably linked together. So on Yom Kippur, we can’t fully address our inner
sitra achra and get it to quiet down without also addressing the world we live
in—and, conversely, we can’t direct all our energy outward at the world without
also dealing with our own personal, interior villains.

This past year, I read Congressman John Lewis’s memoir, Walking With the Wind.
Rabbi Sharon Kleinbaum of CBST in Manhattan told me it was required reading for
anyone interested in pursuing justice, and having read it, I have to agree. I learned a
huge amount from Congressman Lewis, but the thing that surprised me the most
was a core lesson from one of his mentors, the Rev. Jim Lawson.

Now, I know there are folks in this room who remember the civil rights era, and
even those who were active in it. Maybe you know the name Jim Lawson already. I
didn’t—history hasn’t remembered him the way it has remembered Martin Luther
King, John Lewis, even Ella Baker. But he is the teacher who first prepared Lewis for
the roles he would later play.

When Lewis was a young college student, just beginning to learn the principles of
nonviolent resistance and to train for participating in the movement, Rev. Lawson
taught him that to really embody the ethos of nonviolence, the nonviolence must go
to your very core. In other words, it’s not just enough to behave nonviolently in the
face of violence, to turn the other cheek; you have to actually love the person who is
assaulting you.

I’ll say that again because it’s so counter intuitive: John Lewis had to love Bull
Connor while Connor’s deputies and dogs were attacking him—with all his heart,
with all his soul, and with all his might—or else it wasn’t really nonviolent
resistance.

What an extraordinary concept. What a supremely difficult act of emotional
gymnastics. I have to tell you right now that I don’t think I could do it. To his credit,
Congressman Lewis doesn’t brag about having accomplished it himself—only that it
was a high bar Rev. Lawson set for him and that he accepted for himself. But even if I
couldn’t do it myself, I can still learn something valuable from it.
We have a similar idea in Kabbalah, Jewish mysticism, which understands God as
containing a variety of aspects, or sefirot, that interact with each other. That is how
the Kabbalists reconciled the complete unity of God with the various ways that
Torah presents God—as, say, warrior, lawgiver, and parent. Two of the sefirot you
will hear the most about in Kabbalah 101 circles are Din, which is also called
Gevurah, and Chesed.

Din is judgment, constraint, boundary-setting, power. It’s also the source of divine
wrath, what we might call righteous indignation. Din is the strict force that sets
things right. It’s the mental state we find ourselves in when we castigate ourselves
for all the things we’ve done wrong over the past year. It’s the anger that wells up
inside of us when we look out at the world and see all the terrible injustice, the bald-
faced lies, the greed that goes unpunished. And, according to some Kabbalists, it’s
the place in God where the sitra achra, the Other Side, originates. Din is ascendant as
Tishrei rolls in. That is why Rosh Hashanah is called Yom HaDin, the Day of Din.
God’s anger is poised to rampage through the world, burning up everything that
doesn’t measure up to a strict moral standard.

But a world governed solely by Din could not exist. Nothing would pass muster. And
as much as we might want to turn Din loose on our enemies, the results would end
up pretty ugly. So Din has a counterpart: Chesed. Chesed is God’s abundant, all-
consuming love. It is boundless acceptance, whole-hearted welcome. It is a love that
knows no limits.

I want to suggest that the Jewish version of Rev. Lawson’s loving your enemy might
be tapping into Chesed. Imagine a love so big that it encompasses even the parts of
yourself that you hate, even the people out in the world who do you harm, whom
you think are evil. It’s not a love that says those people, or those parts of you, are
fine the way they are, but it loves them just the same. Congressman Lewis writes
that one way to practice this theology is to envision the person who is confronting
you, even beating you, as a baby. And that made me think of a parent putting a giant
bear hug around a kid who is throwing a massive temper tantrum. No matter how
much the kid kicks, flails, and screams—no matter how much the kid actually hurts
the parent in the process—the parent is not gonna let go, because yes, the behavior
has to change, but in the meanwhile that’s not important; what’s important is the
love so big.

How are we to take this hard-to- swallow advice about loving our dark sides and
apply it to our internal teshuvah and/or to our public activism? I want to turn to Unetaneh Tokef, the haunting vision of God’s justice we say towards the beginning
of Musaf on Rosh Hashanah and Yom Kippur, for two possible answers.
First: Unetaneh Tokef describes God inspecting each one of us, like a shepherd who
passes his sheep one at a time beneath his staff. I want to turn that image on its
head. Rather than passing beneath the staff to make sure we’ve been counted, what
if we envision that staff as “setting the bar high”? Yom Kippur isn’t meant to be easy.
Maybe we should accept how difficult it is to love our enemies into oblivion and still,
somehow, strive for it.

Here’s the second suggestion: Din and Chesed have a synthesis, a balancing point
between them that blends their energies into something more sustainable. It is
called Tiferet, Beauty, or Emet, Truth. And, to my ear, Unetaneh Tokef refers to
it—though we don’t know who wrote this magnificent prayer, so I can’t tell you for
sure that this was what the author intended.

Unetaneh Tokef begins:
“We shall ascribe holiness to this day,
For it is awesome and terrible,
And Your sovereignty is exalted upon it.”
Then,
“Your throne is established in Chesed,
And You will sit upon it in Emet.”
Did you catch that? Even though this month of Tishrei is when Din, righteous
indignation, is ascendant, God establishes the divine throne in Chesed, abundant
love. This is a slightly different conception than the piece of Talmud we looked at
together on the second morning of Rosh Hashanah, where it seemed there were two
thrones, the throne of judgment and the throne of mercy. Here, there seems to be
just one throne, and God can move it around, almost as if from room to room of the
divine palace. But it also seems that God can’t quite sit on the throne in Chesed, and
so God compromises, and sits at the balancing point, Emet, Truth. Why? Look at the
very next line of Unetaneh Tokef:
“Emet, for You are a Dayan”—a judge, one who practices Din. Din—Dayan—same
Hebrew root.

In other words, God wants to move from the natural spot of Din, to meet us all the
way over on the other side, in Chesed, but God can’t quite make it. It’s against a part
of God’s innate nature. A Dayan can’t fully get away from Din without giving up the
identity of Judge. So God meets us halfway, in Emet, Truth.

Maybe we need to do the same. When we are struggling against our inner demons
and our outer ones, we naturally want to turn our full fury against them. We know
that’s not really healthy, that a scorched-earth policy leaves barren ground where
nothing can grow. But we also can’t bring ourselves to love them to death—we’re not that level of tzadikim. So we compromise. We meet them in truth, the place that
balances justice and accountability with love.
Yom Kippur is the day of truth. More than any other day of the year, it is the day that
calls us to assess ourselves honestly, to see our role in the world clear-eyed. And it is
also a day where we hope to grow beyond the selves we have been this past year.
Instead of scorched earth, we seek to plant seeds of change. Perhaps that is one
reason Sukkot, the festival of harvest, starts in just four days, as we symbolically
harvest the fruits of the effort we have put in these past ten days of repentance. The
Psalmist tells us, “Truth will sprout, from the ground.” (Ps. 85:12) Today we prepare
that fertile ground from which truth can sprout, within ourselves, within our local
community, and within our society at large. We do it through justice and love, so
that we can ultimately reap and share the blessings of truth. 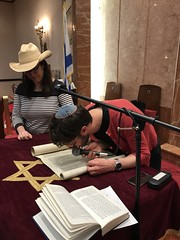 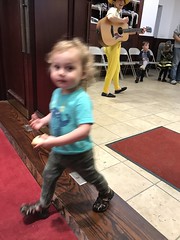 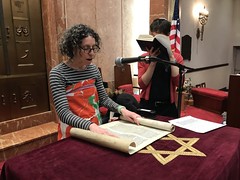